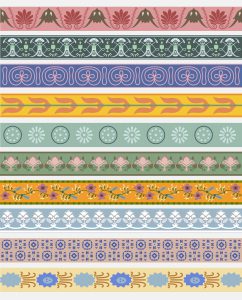 Through extensive analysis it can be shown that the organization of the highly complex Meʔpá (Azoyú Tlapanec) verbal paradigms is for the most part transparently based on the expression of grammatical categories, even if these categories are sometimes typologically unfamiliar. There are also phonological principles at work in defining various subclasses, even if these are sometimes also difficult to unravel. However, within one of the grammatically defined classes it is necessary to operate with subclasses that are truly arbitrary. This concerns the tonal paradigms of semantically transitive verbs taking a high-impact (ergative) animate agent and an inanimate undergoer. For these, person inflection is tonal, and 24 different tonal paradigms have been identified. Apart from negative evidence –absence of non-arbitrary phonological, semantic or grammatical determinants of class membership– it is also possible to observe positive evidence that class membership is essentially stochastic. First, the sizes of the classes follow a power-law distribution (with a few large classes, some intermediate ones and many small ones, resulting in a straight line having a negative slope when size is plotted as a function of rank of size using log-log scales). Secondly, the more members a tonal class has, the more similar it is to other classes. Together, these two characteristics bear witness to a diachronic trajectory involving the principle of preferential attachment, which also governs many natural and social phenomena.